The Capture of the Voladora, Little Popo, 1829

This painting depicts British anti-slaving patrols in the Caribbean. After, the people on board became Liberated Africans following the condemnation of the ship by the Havana Slave Trade Commission. The people on board this vessel were "liberated" and registered by the Havana Slave Trade. The majority of the people on this slave ship were classified as Mina Fante and Mina Popo, who were not involved in Oyo's collapse, had Twi names, and arrived to Little Popo from the immediate hinterland or further west perhaps via Asante trade routes. Out of 330 enslaved people, there were 56 Lucumí and 29 were classified as Lucumí Chambá (Tchamba from the Atakora Mountains), 12 Lucumí Tapá (Nupe ), 6 Lucumí Ayó (Oyo), 3 Lucumí Agusá (Hausa), 3 Lucumí Mosi (Mossi), and 3 Lucumí Ebá (Egba). It is possible that many of these people arrived by entering or circumventing Dahomey trade networks. According to the map of 1829, refugees mostly Egba or Owu settled at Abeokuta, where they defended themselves at Olumo Rock. Meanwhile, Dahomey was pushing east by attacking areas around Ketu, as well as in Egbado, Anago and Awori areas, suggesting Yoruba speakers on the Voladora came from the more western areas and went through Dahomey before reaching Little Popo. Dahomey incursions in Mahi territory continued, including the destruction of Dokoundji, while the kingdom of Ketu distanced itself from Oyo at this time, but could have received Hausa, Oyo and Nupe slaves involved in jihad and traded with Dahomey. Tchamba and Mossi people, who were not involved in Oyo's collapse, could have descended from the Atakora Mountains in caravans via Djougou and perhaps Atakpamé.

The image description below is quoted directly from the Royal Museums Greenwhich. Despite little information about the people on board, it explains the event and artists in more detail:

On the morning of 5 June 1829, while cruising off the north-west coast of Cuba, HM Schooner ‘Pickle’ discovered a strange sail. This she stalked until she had interposed herself between the stranger and land. She closed in on her after nightfall. Action then commenced and after 80 minutes the slaver, as she proved, surrendered. She was the Spanish topsail schooner 'Voladora' - though English references tend to use ‘Bolodora’ - with a crew of 60 of which 10 were killed. The ‘Pickle’ had only half that number in her crew of which one was killed outright and three died later. The prize was taken to Havana with some difficulty as she had to be jury rigged and the prisoners were in the majority. They and the slaves were delivered to the Spanish governor. The painting shows the night scene with the event being lit by the flash of the guns and slightly by the moon seen low over the ‘Bolodora’s stern. In the right foreground she is shown broadside-on and flying the American flag. Her mainmast shot away, she is trailing rigging over the stern and her sails are much cut up. She is shown silhouetted against the gunfire and explosions as the fight continies with ‘Pickle’ beyond her on the left. In the centre foreground is a boat full of people escaping from the action. The painting is based on a print by Edward Duncan after William John Huggins, published in 1831 (see PAG9091). This calls the slaver 'Bolodora', though this painting was acquired in 1950 with the spelling 'Boladora'. 'Voladora' - the ship's Spanish name- can mean 'flying fish' or refer to a witch who could turn herself into a bird in the mythology of Chiloe (an island on the Chilean coast), either appropriate for a fast and elusive vessel. The artist, usually called John Moore of Ipswich was born in 1820 (and died in 1902), so it may be a considerably later version.

"The Capture of the Voladora, Little Popo, 1829", Slavery Images: A Visual Record of the African Slave Trade and Slave Life in the Early African Diaspora, accessed December 5, 2022, http://yorubadiaspora.org/s/yorubadiaspora/item/3315 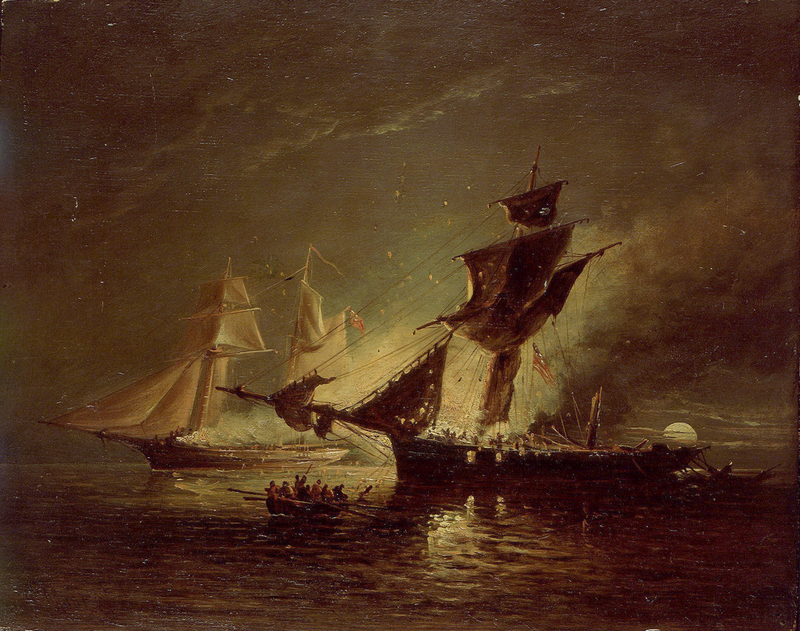 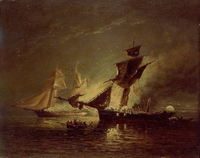