Samuel Ajayi Crowther by Ernest Edwards albumen carte-de-visite, 1864; National Portrait Gallery. Born in Osogun (now western Nigeria), of Yoruban descent, Ajayi was sold into slavery at the age of 13. He was sold several times before landing in the hands of Portuguese traders who purchased him for the transatlantic market. Before it could reach it's destination, the ship he sailed upon was stormed by the British navy's anti-slave trade patrol, the slaves aboard were set free in Sierra Leone. It was here that he became a Christian, he was baptised and named after Samuel Crowther a clergyman in England. In 1827 he became a mission teacher at Fourah Bay Institution founded by the Church Missionary Society to recruit and train Sierra Leoneans into missionary services. He assisted English missionaries in their studies of African languages and studied himself in London, returning to open his own mission in Yorubaland. He is credited with pioneering an early form of Christian-Muslim dialogue to encourage peace. His contributions to evangelization and translation have often been undervalued. 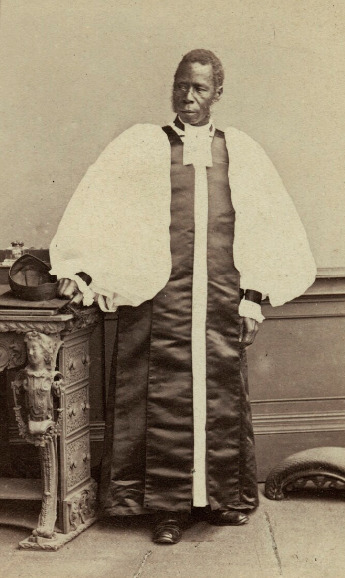