The Negrito was the twentieth conviction of a slave ship by the Havana Slave Trade Commission. It should not be confused with the Negrita a ship arriving from the Bight of Biafra. This Spanish brig, under the command of Francisco Antonio Sarria, began its voyage at Havana and set sail for Ouidah on 17 June 1832 loaded with cotton goods, aguardiente and gunpowder. On 10 October, this ship sailed from Africa with 534 people on board and 8 individuals died during the middle passage. On 21 November 1832, the HMS brig Victor, under the command of Captain Robert Rupell, spotted this ship while cruising near Tobago and Grenada around N12° and W60°35. On 11 December, the Negrito arrived in Havana. escorted it into the Bay of Havana to await trial. At the time of her seizure, there was sufficient water and provision. At the time of detention, there were 526 people on board, but only 490 people reached Havana. On 20 December, the court condemned this ship for sale and issued emancipation certificates for 477 people. These people were emancipated immediately before the cholera epidemic decimated Cuba's population through the first months of 1833. For more information, see Map of 1832. 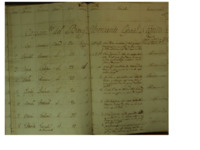