The Manuelita was the twenty third conviction of a slave ship by the Havana Slave Trade Commission. This Spanish schooner, under the command of José Garay, began its voyage at Havana on 17 June 1833. It set sail for Lagos loaded with a cargo of dry goods, aguardiente, gunpowder and letters for St. Thomas "which Island she only touched." On 30 October, this ship sailed from Africa with 523 people on board and 38 individuals died during the middle passage. On 7 December, the HMS schooner Nimble, under the command of Lieutenant Charles Bolton, engaged with this ship for about an hour off the southern tip of the Isle of Pines around N21°4 and W82°26. After reaching Havana, 1 person died. On 17 December, the court condemned this slave vessel for sale. At the date of the sentence, there remained alive 484 people, but the court only issued emancipation certificates for 477 individuals. This case is closely tied to the Joaquina, which had arrived in late November and the Havana Slave Trade Commission was already in debate about the possibility of removing individuals to Trinidad.

By early January 1834, the Cuban government agreed to pay for the transportation of groups of people to Trinidad, provide one month's notice to the Governor of Trinidad, pay for provisions and clothing, and send an equal number of men and women. On 16 January, the Havana Slave Trade Commission made a register containing people from both slave ships who were sent to Trinidad. These records include African names, Christian names and a register number corresponding to the larger and more complete registers (making it possible to determine who left Cuba from which ship). In addition, the register also demonstrates the substitutions of 7 people before departure. On 21 January, 63 women and 101 men from the Manuelita, along with 43 women and 5 men from the Joaquina (leaving the Bight of Biafra), were sent to Trinidad on board the Manuelita, under the command of Salvador Castello. During the passage from Cuba, 5 people died. On 27 February 1834, the Manuelita arrived to Trinidad and 1 person died shortly after. At this time, the Governor of Trinidad stated that he "will receive 1000 Africans to consist of 500 males and 500 females under 30 years of age (the males not to have been more than two years captured)." For more information, see Map of 1833. 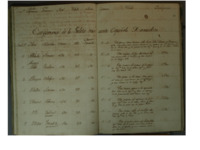