The Julita was the twenty seventh conviction of a slave ship by the Havana Slave Trade Commission. This Spanish schooner, under the command of Gabriel Perez, began its voyage at Havana and set sail for Ouidah on 25 March 1834 loaded with a cargo of spirits, cotton goods and some silver. On 2 December, this ship sailed from Africa with 353 people on board and 11 individuals died during the middle passage. On 22 January 1835, the HMS sloop Racer, under the command of James Hope, detained this ship between Tortuga and Inagua Grande islands around N20°26 and W72°36. From the point of capture and the registration of Liberated Africans, another 6 people died. On 21 February, the court condemned this slave vessel for sale and issued emancipation certificates for 336 people. For more information, see Map of 1835.

The decision to remove people on the Julita from Havana to Trinidad ties into the case of the María, which completed its trial on 26 January. There was a discussion to send off all "the Females of the Carlota, María and Julita with an equal number of males." Nobody from the Carlota went because they were suffering from "choleric symptoms." On 24 February, 304 people boarded the Spanish ketch Moratin and went to Trinidad. This convoy included 91 females and 93 males from the Julita, as well as 60 females and 60 males from the María. They arrived to Trinidad on 11 March in "tolerable health." The sick were sent to the hospital and two people died during the passage. At this time, the Governor of Trinidad approved the resettlement of other Liberated Africans from Cuba. He stated that he "shall be glad to receive many more Africans [and he ] should not have the least difficulty in locating several thousands, to whom would be secured humane and kind treatment in return for moderate and habitual labor, by which this interesting colony would be much benefited." After which, these people were foced into apprenticeships as Liberated Africans. 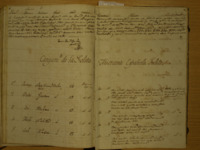