The Tita was the thirty first conviction of a slave ship by the Havana Slave Trade Commission. This Spanish schooner, under the command of Juan Costa, began its voyage at Matanzas on 10 July 1834 and then left Havana for Ouidah on 17 July loaded with a cargo of aguardiente and dry goods. On 25 May 1835, this ship sailed from Africa with 402 people on board and 8 individuals died during the middle passage. On 29 June, the HMS sloop Serpent, under the command of Evan Nepean, detained this ship between Inagua Grande and the Cayo de Santo Domingo around N21°20 and W74°23. During the trial, 2 other people died. On 14 July, the court condemned this slave vessel for sale and issued emancipation certificates for 392 people. For more information, see Map of 1835.

The removal of 268 Liberated Africans from Havana to Trinidad took place on 4 August. These people gave their consent "by means of an interpreter." Although the practice of making resettlement registers discontinued from this point onward, they selected "all the healthy females... and as many males" from the Tita. On 14 September, 262 Liberated Africans arrived to Trinidad on board the Siete Hermanas and 6 males died during the voyage. 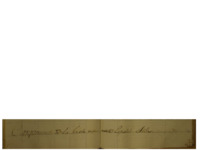