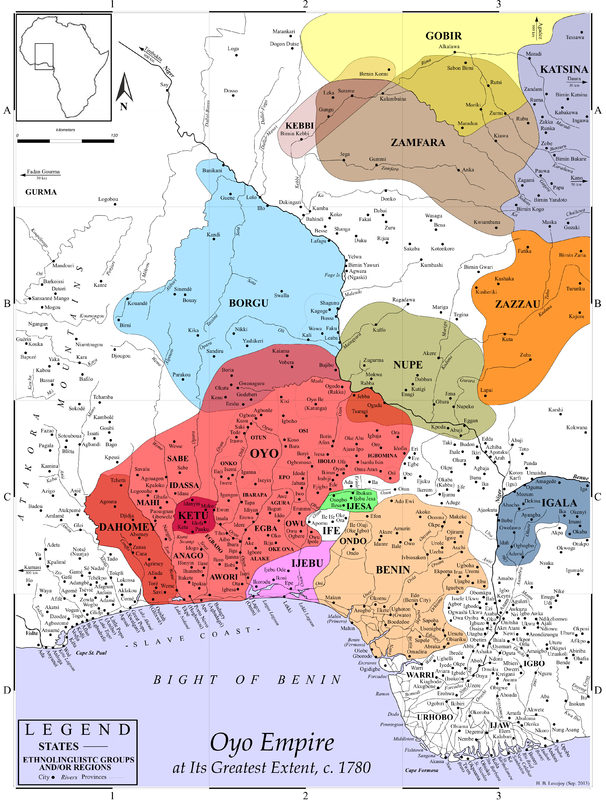 Yoruba Diaspora is a Cartographically Based Interactive Digital Archive (CBIDA), which is a series of annual maps that operates on a temporal scale and hosts archival materials. Current development involves uploading data and primary sources as they are verified. Connecting these data to this concept is challenging and has involved collaboration among historians, computer scientists, and mathematicians. The website represents the amalgamation of a series of experiments to determine whether or not it is possible to map intra-African conflict to unravel internal and external African migrations. The project director, Henry B. Lovejoy, has compiled geo-referenced data that are aligned with slave voyages to visualize the process whereby inland conflict became a source of captives who boarded slave ships destined for the Americas. The geographic scope of the project reflects an area in southwestern Nigeria, as well as parts of Benin and Togo. In the past, this area was dominated by several kingdoms that engaged in trading enslaved people.

This sustainable resource uses Omeka-S, QGIS and R ShinyApp to visualize inland zones of conflict and link it to available primary sources and imagery. CBIDA uses a Simple Carousel that hosts annual maps and added coding designed by several contributors. Site administrators have then tagged image co-ordinates which are linked into individual pages. To learn more about each of the individual maps, "click" the area of the Bight of Benin hinterland to connect to a page that reveals the geo-political context in a given year. Additionally, users can click individual ships to link into a page, which is designed to host caches of primary sources, historical images, brief descriptions, and other multimedia. This structure is sustainable since it uses images rather than connects to datasets. Because the static maps cannot be changed, zoom features are being developed to enable better readability of town names and shipping information. The descriptive nature of the maps and other multimedia make it possible for the hearing and visually impaired to gain access.

The collapse of Oyo between 1817 and 1836 transformed the interior of the Bight of Benin and the emergence of a pan-Yoruba identity that spanned the Atlantic world. From the seventeenth century to the second decade of the nineteenth century, Oyo had been the largest slave trading state in West Africa, controlling most of the slave trade in the interior of the Bight of Benin along a coastline known among Europeans as the “Slave Coast.” Oyo was largely responsible for supplying an estimated 1.8 million people into Atlantic networks, mostly through the port of Ouidah and then subsequently through Porto Novo and Badagry. Ouidah was the second largest port of departure for enslaved Africans in the entire history of the slave trade, second only to Luanda in west central Africa.

The situation changed dramatically with the outbreak of jihad in the Hausa region to the north after 1804, the establishment of the Sokoto Caliphate and the spread of jihad to Nupe, which had been a dependency of Oyo, in 1810. Most significantly, a Muslim uprising at Ilorin in 1817 thrust the jihad into the politics of the Oyo heartland. Ilorin was the military outpost of  of Oyo, because constitutionally the Alaafin was not permitted to have his own military regiments at the Oyo capital but instead had to station troops, many of whom were Muslims, at Ilorin under the titled official, Are-ona Kakanfo. This internal strife, complicated by the spread of jihad, set in motion a series of wars that resulted in the incorporation of Ilorin into the Sokoto Caliphate in 1823 and continuing strife within Oyo until the final destruction of its capital in 1836.

The resulting population displacement between 1817 and 1836 led to a period of intense urbanization as refugees moved southward and settled at Abeokuta, Ibadan, Lagos, and “New Oyo,” which remain some of Nigeria’s largest cities today. Victims of Oyo’s collapse were also forced into internal slave trades and taken into the Sokoto Caliphate, Dahomey, the kingdom of Benin, Borgu, Nupe, and beyond. In terms of the transatlantic trade, an estimated 121,000 people left the Bight of Benin in the period in question, mostly to three destinations: Brazil (42%), Cuba (40%), and due to British abolition efforts after 1807, Freetown, Sierra Leone (18%); and then from those destinations to other places in West Africa, the Caribbean and even the United States.

The before and after maps below show the political transformation that resulted from the jihad and the collapse of Oyo. 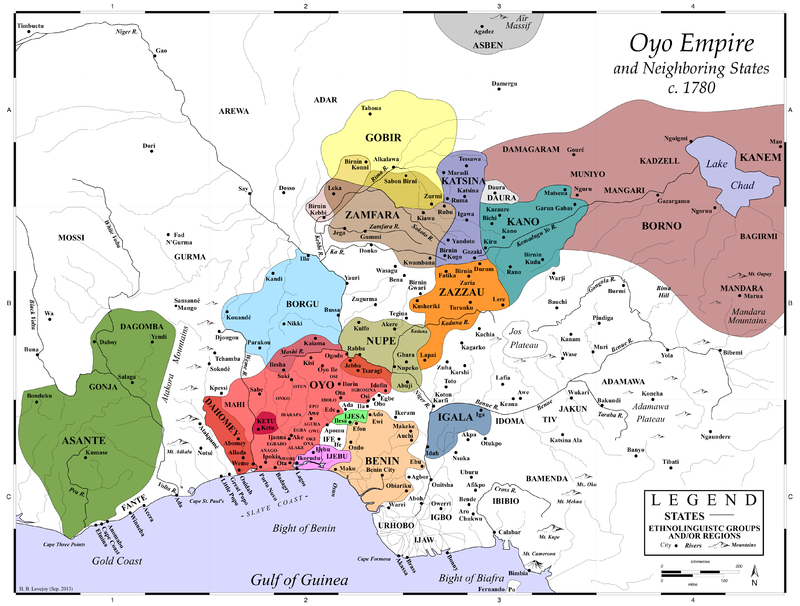 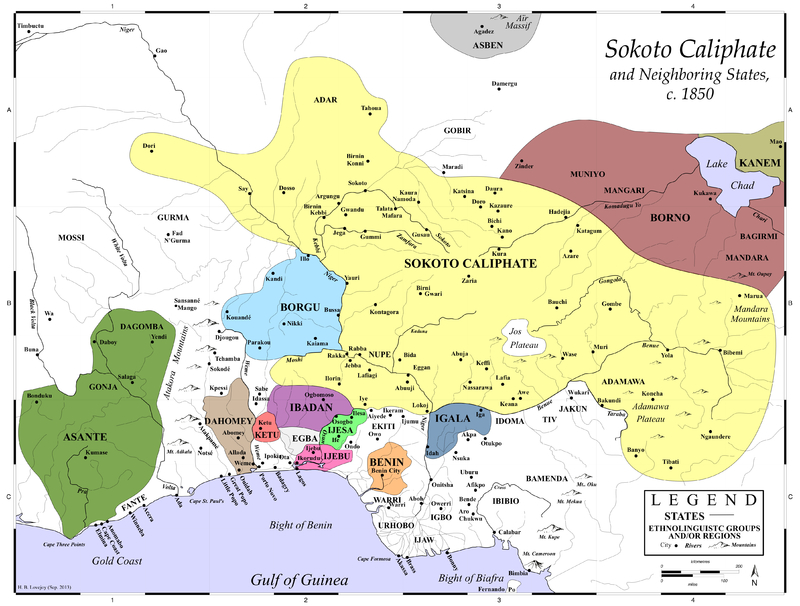